A cloudy day, which was forecast to stay cold and windy, provoked the suggestion to have, ‘a nice day out.’ We shoved a few bits and bobs down below and took the short car-ferry crossing to the mainland.

The sharp left turn into the hills above Galatas snaked through little settlements of scattered homes and we nearly stopped at a couple of tempting bakeries. Looking down towards sea level it seemed as though the fields were full of poppies but they were also full of people, first identifiable by the bobbing hats.  A mystery, maybe the flowers were carnations and the people were pickers? Later we stumbled across a huge heap of composting, long stemmed, dark red roses.

So, on we X-trailed until encountering a tempting sign to the ‘Moose Tower.’

Our trusty 4 wheeler ground up the winter-rain-damaged track until common sense screamed ‘enough!’ 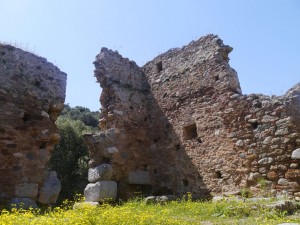 We clambered out and let Kezzie go. Our usually be-leaded little lab sprung up the antique steps of the Tower and we marvelled at the beautiful verdant landscape all around and breathed in the wonderful greenness of it all. The air was warm and full of fresh spring scents and sounds, the sort of moment to bottle and treasure.

Of course we had to keep walking, up the stoney pot holed track, to a sign…directing us to the right, to ‘Devils Bridge.’

Puffy yellow phlomis had sprung up everywhere and the blues, pinks and purples of many other brave spring blooms filled the spaces in-between. It was like a Botanical Garden of weeds.

Suddenly, as we rounded a bend, the sound of tumbling water encouraged us to keep going.

A massive noisy waterfall, fingers of white flayed against the grey rock, flung itself inexorably down before flowing more tidily between steep banks. 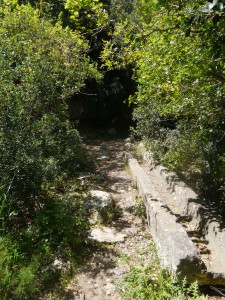 It was such a breathtaking and wonderful sight with sound.

There is an ancient natural bridge across the mountain stream with a grooved aqua-duct cut into one side and a long and craggy drop to the boulders down below. Trees arch across to give dappled shade, whilst mosses, lichen and tangled stems overcrowd from everywhere. Interesting that this beautiful little treasure be named after ‘you know who!’ 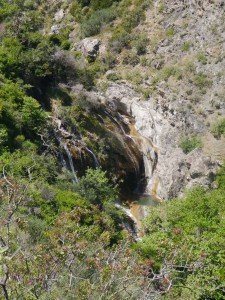 Some research has revealed that the The Illikos river ( our fast flowing mountain stream!) irrigates the surrounding high value olive, lemon and orange groves, bringing sediment and fertility with it. There are apparently even rock pools further downstream where it is possible to bathe.
After great lungfuls of perfect air and spectacular views across the valley we descended to the car and continued on to Methana to find some lunch. On our way we stopped to pick an enormous bunch of wild fennel, Maratho in my Greek dictionary.  Reminded us of Amaranthe, the name of the French owned boat which spent the winter alongside us in the yard. Such lovely people, always smiling, never in a hurry. They call us ‘the young retired’ because we rush around! Hopefully we’ll catch up with each other again soon.

Well we gave our fragrant offering to the taverna nearest to us on the quay and Takis was delighted…and called it A-maratho. Talking of rights and wrongs I might as well confess that for some time I’ve been apologising by saying ‘p-somi’ ( bread) instead of ‘syg-nomi’ ( sorry.)