The evening before heading out to the Cyclades we took steep winding steps to a strategic ridge overlooking both the bay and channel leading to Poros quay. Each time we make our huffing, puffing ascent we discover a different path, plant or hidden treasure. This time our scratchy stubbly track took us to a tiny church either perched on or hewn from the rock, hard to tell which as it appeared so settled and right.

Immediately and unbidden, the word ‘parley’ came to mind.

Around the doors and shaded by trees were an array of small benches and painted tree stumps, spaced in such a way as to suggest….well a parley. 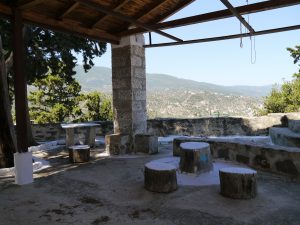 First thoughts were of pirates demanding an audience with their adversaries or Captain, but no, this was a church. Sitting quietly on a stump it was easy to imagine the weary, disappointed, grief stricken and furious making individual journeys to this little outpost where communication with their ( seemingly opposing ) God was the first…or last resort. 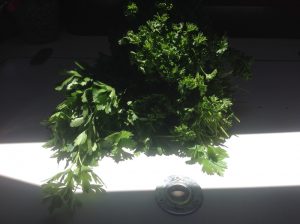 Parley, it’s a good word and not just one belonging to Jack Sparrow.

So the following day we confidently sprighted off across the shipping lanes, in amongst a merriment of dolphins and past St. George’s rock to a superb bay in the closest of the Cyclades for an evening swim and scamper ashore for Kezzie.

Simon could see a big wind lurking ‘out there’ so after a few days we headed round to the harbour where we usually hide and where we have made some lovely friends. About half way there we came across an Italian registered, rather disheveled looking boat, going nowhere in circles and with a frantically waving lone sailor on board. It was quite choppy but we approached as close as possible and, after ascertaining that his engine

was kaput, offered a tow. The Eastern European skipper called out the destination (A) he was headed for and we told him the destination (B) that was on offer. He was not impressed and tried to insist that we take him to A. The clouds were already gathering ominously and we refused to change direction. However we did remember our intrepid fisherman ( see previous post) and after establishing that he had a mobile onboard we sealed fisherman’s contact details into a plastic beaker, circled again and managed to drop the container in his dinghy. We watched our lonesome sailor climb in to retrieve it before heading back on our course.

The weather prediction was accurate, from the safety of our harbour mooring we monitored the piling waves and frothing breakers and over the next few days took the lines from a few boats that rocked in for shelter.

There are several larger boats out in the Cyclades which are skippered by piratical looking chaps. With wild hair, one earring, cut off jeans and bare chests they nimbly prance from stern to bow, backwards, forwards and sideways fixing, steering, adjusting and usually with a rollup between their teeth.

We have a great fondness for these particular rascals ( and yes there is always a beautiful mate) who run ‘skippered charters’. They handle their 50ft ish vessels with boldness and aim to give brave guests a taste of adventure off the normal rentaboat track, usually only sliding into port for some water and supplies. One guy we have a soft spot for has even adopted a stray dog which wears a neckerchief and sleeps on the bow, guarding his master’s hatch.

Well, this little bout of bad weather gave us snatches of opportunity to catch up and chat with some of these entrepreneurs and they were of one weary heart and mind.

‘The weather patterns have changed dramatically, these past few years have seen relentless winds hammering through the Cyclades in unpredictable rhythms’, they groaned through twists of baccy. ‘We are exhausted and feel like we are in a constant battle…where does it all come from?’

We sympathised and pondered, ‘time for these guys to parley perhaps?’ 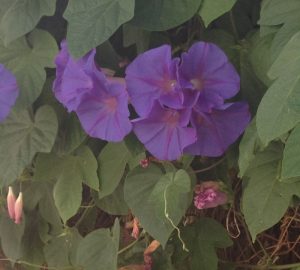 On our way back to the Peloponnese we spent a night back in fisherman fixit’s bay. An evening stroll took us past one of those strange ‘outpost’ boat yards where impossible projects are cradled alongside works-in-progress. 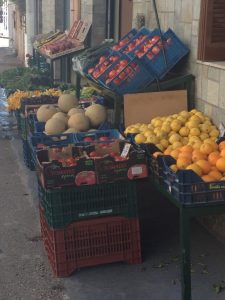 In the glowing warmth of late afternoon we smiled at the sight of little stubby keeled ‘Josephine of Rye’, poised at the entrance to the yard, then adjusted our gaze water-wards to focus on another boat which was tied to a rickety old pontoon nearby.

Nobody on board but Kaput had been towed home.

The term written as “parley” on the Pirata Codex was known as a right in the Code of the Pirate Brethren, set down by Morgan and Bartholomew, that allowed any person to invoke temporary protection and brought before the captain to “negotiate” without being attacked until the parley is complete.