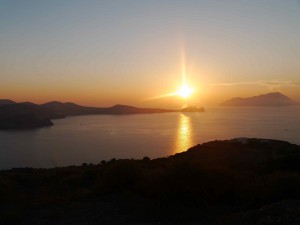 Joel and Chris stepped off the ferry and onto Rope Sole late one Saturday evening and immediately cosied into their allotted cabin. So lovely to see them and great to have crew again!
We motored, sailed and motor-sailed across to a favourite anchorage in the Cyclades, arriving with just enough illumination to drop the hook and enjoy the bay while the nearly full moon received her baton of soft light . This is the way to sleep soundly!
Our two enthusiasts rose early and took Kezzie ashore for the dash of a dervish which often follows her hours at sea. September 7 and the sea was still pre-breakfast bath-warm and wholly inviting to us all.
And so to Serifos, another favourite island, long ago visited by Joel but new to Chris. We secured a good spot and settled for a sociable evening onboard. An English couple were moored along the North side, a position we were relieved to move from last year and we wondered how they would fare. It wasn’t until the next day and strengthening winds that we were all able to help them round to ‘the other side.’ It’s a strange thing about this quay, we have always encountered a helpful sense of camaraderie amongst the yotties which quickly springs into action as we cling like mussels to its exterior.
One of the growing pleasures we are enjoying is surprise encounters with folk we re-encounter along the way and very soon we were joined by a lovely french couple, having privately nicknamed the husband ‘the singing Frenchman.’ This was due to his endearing habit of quietly singing French folk songs whilst sitting astride his coach roof as he waited for adjacent boats to leave, thus taking their anchor chain off his! Mmmm. what a gentle example to us all.
Serifos, delightful Sifnos and on to Milos where we hired a car and challenged the dirt tracks to a dual of wit and daring. The remotest taverna, should also be the least visited but, as previously, we parked amongst several other dusty steeds and enjoyed a large salad.
The sunset from the Chora is fabulous and famous and we arrived with about ten minutes to spare. Joining a straggle of variously dressed ( from high heels and evening dress to vests and flipflops) admirers, speaking a tantalizing clutch of languages. We sat down and enjoyed the awesome lightshow. Interestingly the massive tree-full of squabbling cicadas nearby, immediately fell silent as the sun plummeted.
We admired the many handcrafted wares optimistically showcased in the hilltop shops whilst looking for refreshments. After maneuvering 4 comfy rattan chairs, one dog and a small table we settled down for ‘apperos’ outside a smart looking bar. Not so fast! A quick look at the menu informed us that we could dine out twice for the price of one trendy round….so we beetled off to find the car, the speedy exit prompting Simon to wonder, helpfully, if I had turned off the pressure cooker! No explosive noises or ball of fire from the harbour so probably yes!!
Settling lazily into the cockpit we were glad to chat with recent neighbours ( from Serifos AND Sifnos) and we all commented on the enormous pedigree motor yacht next to us which would undoubtedly have its noisy generator on all night.
Some considerable time later a couple of taxis arrived, turned on the narrow quay and waited in attendance for the party to disembark, presumably for dinner.
These poor guys chatted with each other as the crew dashed back and forth, checking and rechecking the arrangements while the owners and guests relaxed in huge recliners. All very entertaining for us and providing much scope for conjecture. Who were these ‘tycoons’ and why make everyone hang around like this?
At 10pm. all became clear. The obviously family party descended the wide gang plank, grandparents at the front and parents at the rear…..whilst the son, a gentle smiling teenager very slowly and awkwardly managed his arms and legs, clearly suffering cerebral palsy or similar….between them.
After they had been driven away an equally gentle and polite crew member came across to us and apologised for the noise which the generator would make.
Back in Poros I visited a favourite shop where I bought olive oil soap. The Cypriot owner extolled the quality of his product and I added that it was really good for my husband’s painful skin problem.
‘In Greece we have a story for everyone’ he volunteered, and continued to liken the pursuit of Helen of Troy by Agamemnon to The West’s involvement in the Middle East. He waved his arms at the various brass statues and cast mythical figures around the shelves then jumped into another story.
‘There was a man who went to God and complained bitterly that his cross was too hard to bear. God gently bent down and ushered him towards a door, which he opened. ‘Choose another,’ He replied.
The man moved amongst the crosses, examining each one carefully. Too heavy, too spikey, too long, too wide, too slippery…on and on he muttered to himself in despair.
Quietly he returned to God who was patiently waiting at the door, without saying anything he reconnected with his own.’
It seems there is always something to learn out here.