I’ve been a bit slack on posts this summer but there have been instances and encounters on my mind so this is a broad sweep of recent days. 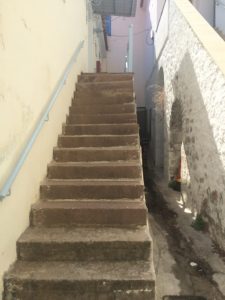 The back streets are always worth investigating, Kezzie and I enjoy a good sniff ‘n stroll and of course Poros comes high on the lengthening list of good’uns.

In August the influx of Athenian and further flung families begins. The mostly shut up houses and apartments are suddenly full of light as doors and windows are flung open whilst balconies fill up like boxes at the theatre. Everyone eager to soak again in the vibrant island life. 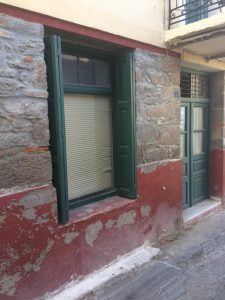 One or two streets back from the quay the houses are more simple but my favourite has dark green doors which are usually open onto the dusty passage outside. Within this dimly lit interior are a few rug-strewn divans which act as sofas, a little kitchen area with table and, gloriously, a piano.

On most days, gentle melodies dance, tumble and march from the shabby apertures and a small boy with book in hand generally sits cross legged on the threshold. 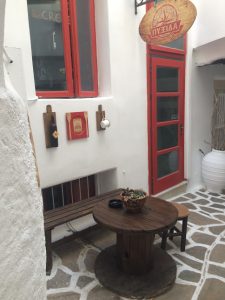 and think of Charmian Clift, Leonard Cohen and others.

Sometimes wind instruments can also be heard, then faltering boy-fingered scales, always contented murmurs from the woven homely comfiness inside. Can you blame me for such wanderings?

These days laundry lasses of alley ways and nooks are overwhelmed with piles, bags and heaps of grubbies, they commandeer husbands, sons…any family-one to fetch and deliver the goods from boats, tavernas and homes, the income from which will keep their families fed through winter months. Our loyalties have remained tight, in-spite of protests from start-up friends and this island is now the unrivalled washing mecca of the Peloponnese. We wistfully remember the days of sauntering to the launderette in Crete but that was moons ago. 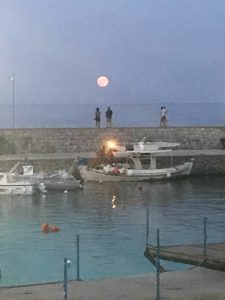 Talking of moons….whilst sitting on the balcony of a much loved taverna recently we gasped as, from beneath the somnolent black sea emerged a whole, complete, full, red moon. With absolute assurance it steadily rose and rose to proclaim artistry of all beneath. Creation wonderfully honouring The Creator.

So now to the latest little back street delight. A few days ago Kezzie and I took a very early morning saunter across to the ‘other side’ of another favourite harbour.

All was still, a lone party-boy sat slumped at a quayside table with beer can in hand…strangely sound asleep though upright and respectfully hatted.

An aproned cafe owner moved deftly amongst his tables and chairs, 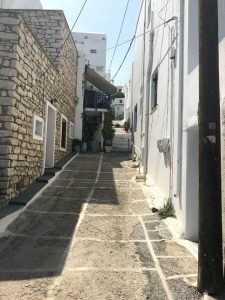 quietly preparing to be the first available coffee stop and Kezzie sniffed and snooped.

Suddenly her paws ground to a halt…a very nearby cat arched her back and furred into a ferocity of attention….as…

From the very narrowest of tiny alleys emerged the most handsomely marked and purposeful tortoise I have ever seen. We all, cat, Kezzie and me stared, admired and gawped as he manfully gaited his way across the cobbles and back into more shadowy recesses. No phone… No camera…No photo….fab memory. 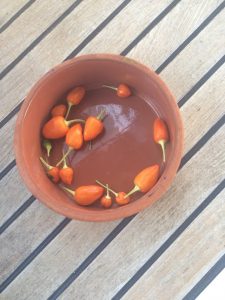 So what’s Simon up to during all these ambles? One of his latest head scratchers was the discovery of a beastly diesel leak in the engine bilges. After a rather rattle’n’roll crossing of the Argolic we started smelling that pesky whiff where it shouldn’t be. We scooped ( understatement)  the offending diesel into every available bottle, jar and yogurt pot and Simon began the search for its origin.

It took a of day of serious thinking followed by the application of a long handled dentist type mirror then removal of a small plastic lug. This was found to be the dirty rascal as it had a minute split running top to bottom down the thread. Extraordinary how such a tiny flaw could cause so much havoc.

Simon ‘just happened’ to have a metal spare in his magic box and we are now back to our usual citronella smelling abode.