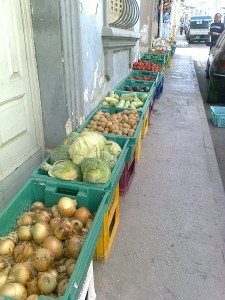 Malta was where we decided I should catch up with Rope Sole and I made contact with wonderful, hospitable, praying Christians with whom I could spend the night before she arrived. Whilst there I met Sharon. This is her story.

Sharon was clearly called by God to live and ‘be’ in a city of many cultures and religions. She has learnt to listen carefully to the voice of Jesus in her ear and moves prayerfully in places of tension and conflict. She lives in the house and neighbourhood of another faith.
The house has three rooms and a small shared kitchen and bathroom. When negotiating the rent the landlord agreed (a) that the third room was too small for a tenant and ( b) that he would maintain an all female house.
Sharon returned home one day to find that a scruffy young man had moved into the tiny third room.
Instantly this God loving, worshipping, prayerful Christian woman turned into an ( at her own admission ) hissing, spiteful cat! She was furious and the fur flew. Every opportunity to show her displeasure was seized and her house mate showed the same disdain. A conspiracy of venom developed.. To compound his failings the poor chap even smoked!
Saturdays are traditionally spent at rest in this city and the high tension of every day living made this a priority for Sharon too. In spite of her negative behaviour and attitude in her home, God was faithful and He continued to bless Sharon and speak with her as she shut herself away and worshipped Him on these days.
However, whilst on her knees one Saturady she became aware of the gap. A wide empty chasm between her behaviour towards the young man God had brought into her life and her worship. She wept with the shame of realising her mistake.
Without mentioning this to her house mate or to the young man she started to narrow the gap, greeting him with warmth and blessing him in her heart. The atmosphere changed and quickly he started to pour out details of his broken life. One day he revealed to Sharon how much he longed for Jesus and she prayed with him gently as he submitted the rest of his life to their Saviour.
Soon after this the young man moved on, Sharon secure in the knowledge that he was now under God’s protection and that she had played her part in his journey. They had both closed significant gaps in their lives