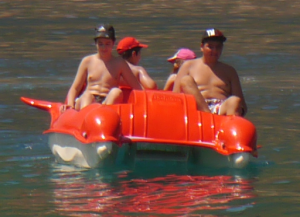 Well…it is Le Weekend after all!
After a quick stroll around the breezy harbour, a coiled spanakopita on a beach bench and a long look at the weather forecast, we optimistically romped out to sea.
With the wind offering 18-20 knts behind us we bowled along and admired the fertile Peloponnese landscape as it fell away behind us. Our destination was Plaka and our only concern was congestion along the tricky harbour wall but we reckoned that by leaving early we’d beat the rush.
Of course the wind gusted as we rounded the entrance and motored into the harbour, we noted the dozens of swimmers bobbing around, the colourful inflatables full of kids and the optimistic fishermen casting their lines. Perfect conditions for a stern-to. Not!
However a mooring angel appeared from the depths of his motorboat and after minimal anxiety ( mine) we were in. Ready to answer the trilling mobile and sort out the crisis of our rental guests back home who had drained the hot water tank and needed a lunch time shower.
One coke, half a beer and a hot water solution later the French arrived.
Secure in our spot we jumped around catching their lines and fending them off just as the next one swept in…and the next.
Number one Fman patiently aided number two Fman who balanced son jolie bateau elegantly over number one’s chain then manfully flipped his craft towards the quay as a plat du jour before a hungry traveller.
I crawled into my blog writing spot in the forward cabin and casually glanced out of the window. Oh ça alors! A ready for action Fman ( number 2) bobbed past in his rubberdub…a lot of chain was raised…lowered…raised again and, I think heaved somewhere else. Possibly in the middle of the bay. After much excitement, advice, then shaking of heads from assorted ‘experts’ he bobbed back….désolé..the plan had failed.
His petit bateau slipped her lines, hung her head and loped into the bay….narrowly missing several pulpits, bows and other chains.
Within seconds a 50′ charter boat hove into view, cleared the harbour wall and entered the ring. Exhausted quayside comrades ( such nautical battles inspire an instant bond) regrouped and turned to the newcomer.
In very clear English the 50 footer’s skipper commanded his French crew to drop the anchor. NOW!
Some confusion as the wind blew them heavily onto another little bateau and while the bemused wife attempted to fend them off, the chattering charter crew decorated the cockpit and helpfully observed the surprise entertainment.
More English shouting and our anchor chain lurched, Simon jumped energetically on the foredeck, waved his arms and very quietly and patiently explained ( to the whole harbour ) that the 50 footer was dragging our chain…..not to mention those of our immediate neighbours….indeed the chains of each boat in the whole harbour, which had, up until 50 footer’s arrival, been securely moored!
Well, I wouldn’t be writing this piece if all was not well again.
We and the 50 footer re anchored, amply aided by many jolly Fmen. The petit bateau slipped alongside while attention was diverted elsewhere whilst Simon and ( the very nice) charter skipper met on the quay, apologised to each other, had a laugh, agreed not to tell anyone and shook hands. The bright orange shark shaped pedalo reappeared and the wonderful song of the Greeks at play rose triumphantly from the beach once more.