From time to time we all get stuck to the quay. The reasons vary from;

equipment failure, waiting for parts or other things to arrive by erratic post, courier or ferry, strong winds, which would make for beastly sailing, rendezvous guest arrangements, or just plain contentment with the place.

Right now we have been ‘quay bound’ for 5 days, held here by a combination of wind and pleasure. The northerlies have been gusting around the harbour and causing much excitement every time a new yacht tries to tie up…the arrival of an enthusiastic flotilla …with detailed channel 69 mooring instructions, ricocheting around the harbour like well whacked squash balls…was yesterday’s highlight.

After a day or so the liveaboards generally indulge in a little bonding and the chatter includes a goodly sprinkle of amusement as everyone has a go with everyone else’s language. It is perfectly possible to make an initial greeting in any dialect with the help of google as I have discovered. Best surprised 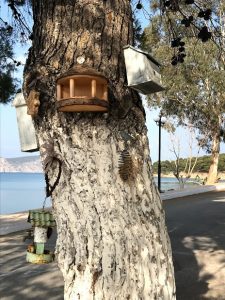 reaction so far from Finns!

A Danish guy approached us a few days ago, asking if we’d like some left-over meat for Kezzie. As usual it’s the dog who makes the initial contact wherever we go. Of course we gratefully accepted, then shared the bowl of delicious pork in pepper sauce…between the three of us. 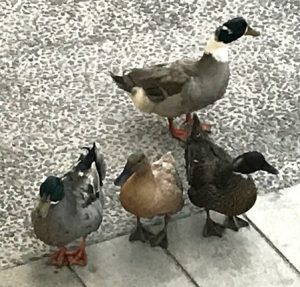 shocking misadventure for the same Danes.  During a particularly gusty blow a yacht made a stern-to approach and Danish wife helpfully accepted a shore line. The wind suddenly snatched at the yacht and Danish wife, still holding the line, was dragged into the sea. Apparently she fractured her hip and femur but was somehow man-handled ashore in a dinghy where an ambulance took her to Athens. All this while we were walking the dog. Everyone is keeping an eye on the yacht but wish it was acceptable to yell ‘quick, get it round something!’ Or ‘let it go!’  to everyone we see taking a line. 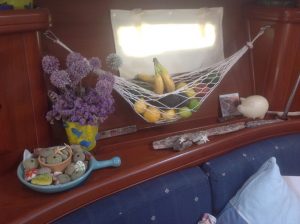 Well, we were sportingly addressed by the new chap on the block on a couple of occasions. Rope Sole has ‘Lymington’ beneath her name, home of the closest Waitrose to our new friend and the most obvious reason to start a conversation. One evening after he and his wife had happily jaunted off to dinner we were surprised to see him sheepishly retracing his steps. ‘Everything alright?’ Called Simon. Our delightful neighbour bashfully confessed that he’d forgotten to sunset the ensign. ‘Oh don’t worry, we don’t stand on ceremony here,’ assured my generous beau. 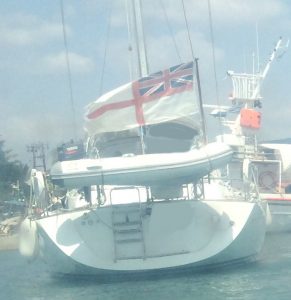 Quick as a flash came the response…’ Oh no…with my luck someone would send the club a snooty letter, notifying them of my misdemeanor…and I’d be for it!’

Quick as another flash the message flew down the line and we’ve all been attending to our etiquette ever since.