This was our Last Sunday before leaving for the 45 mile trundle round to the boatyard and a lightly clouded sky assured a not too hot walk before lunch. 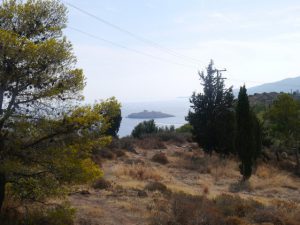 Following some well recalled landmarks we took a steep upwards route, left at  frangipane corner, right at the old community bread ovens and straight on past the caged dogs. Up the steep concreted slope we slowed a bit, but only to admire the ever widening vista of the bay which was rapidly draining her visitors into the Aegean beyond. With plenty of energy in the tank ( yes really) we started across the scraggy summit undergrowth. A disused windmill, solid, doorless but still housing a sturdy wooden ladder, always makes us stop and wonder at the donkeys which must have trailed the grain back and forth. Oh this is a glorious place to wander, totally unkempt and wild. Bright green fir trees abound and have broadcast their seeds so widely that saplings spring out of the wildest nook. The prickly remains of mountain thyme, stripped of their scented

greenery, poked and jabbed at our ankles and the seed heads of wind wracked phlomis generously awaited visits from hungry birds. Simon patiently endured my constant exclamations as I pointed out tiny clumps of cyclamen. Behind boulders, beneath trees and from the depths of the spikiest, most tangled undrgrowth. Really they are the brave treasures of autumn here in Greece and every year brings a fresh and prolific flowering.

A curious concreted path twisted and curved to our right so we pursued it, thinking we had discovered a new route down. After a very steep descent we 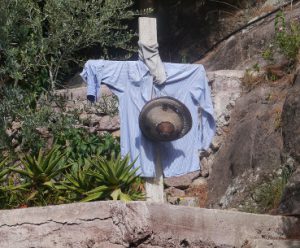 ourselves outside a random mix of homes dug into the rock, no driveways and no ongoing path beyond. However someone had made a scarecrow and cunningly po 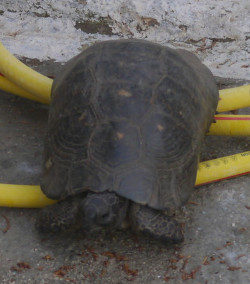 sitioned it under the hillside in a tiny pocket of bare soil. A yellow garden hose straggled the remains of the path and suddenly we realised that the adjacent moving brown was a large tortoise.

Retracing our steps,under a rapidly de-clouding sky we found ourselves in a clearing where a boy’s bike had been propped against a tree. The last time this happened a Hungarian owner appeared from nowhere but now the hillside was deserted and the bike lacked pedals, chain and various other necessities. Behind the bike overhang of rock revealed what I thought was an old torn football but

which turned out to be the lonely remains of an even bigger tortoise.

Eventually we found the right path down and down, so many more cyclamen in many shades of pink, plus unidentifiable stems of elegant daisy like flowers with yello

w centres and, suddenly, with a head to toe measurement of no more than 3 cms, another tortoise, happily munching at path-central then scuttling from Kezzie’s curiousity.

How much delight can two Sunday wanderers whoop on a Greek island?…guess!

Returning to Rope Sole in time to ‘welcome’ a big old Bavaria alongside we fussed around with fenders and shore lines, assuring the burly Polish regatta sailors that all would be well so long as they took their shoes off when crossing our boat and didn’t allow another one outside of them. Our poor fenders were already pancaked along the quay.

For a Sunday lunch treat Takis and Christos served us a delicious lamb kleftico with steamed local vegetables and we happily fell into interesting conversation with a French journalist ( who recalled Interviews with the Shah of Iran and Ayatollah Khomenei ) and his Iranian wife…to our left…and a Greek engineer and his demure German wife to the right. More life storie 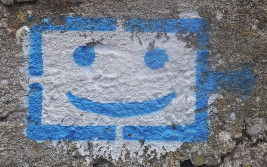 s to make us think.

Returning to Rope Sole yet again we noticed a pile of shoes on our deck and the number of along-sides had increased by one.

Bless them Lord and bless you faithful blog followers for spending another year with us.