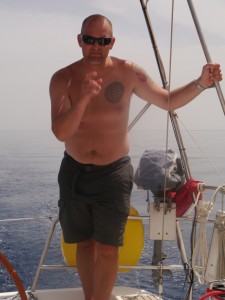 During a hectic week of last minute jobs and waiting for a new exhaust manifold to arrive
(apparently the last one in Europe!) we suddenly decided to change the boat’s name from ‘Mon Ami’ to ‘Rope Sole’. We had toyed with the name since bringing her back to Lymington, in November, moving in our deliberations from ‘Breakout’.. which we decided was a one off decision, now made, to ‘Caleb’….our hero from the Bible whose relentless faith constantly inspires us….to ‘Rope Sole’, the name inspired to us whilst sailing with the family in The Peloponnese ten years ago and which we fondly hold amongst us with its’ history of importing third world artisan products and our cafe in Lymington.

So after welcome family agreement we added the formalities of the change of name to the long list of ‘must do’s. The weather relentlessly slowed us down and we continually agonised over the leaving date.

Charlie arrived on a very wet and windy Saturday ( having been generously collected from Heathrow by our friend and neighbour Terry Paul-Edwards…henceforth TP) and instantly injected a welcome blast of warmth and enthusiasm not to mention a host of practical skills.

Sunday 14th. Gave us a few knots less wind and enough rain-free hours to hold a Happy Hour …which turned into ‘hours’…of family and friends swarming over Rope Sole enjoying some bubbly and the left over beer from our vicar’s recent family wedding. In the midst of this Dominic blessed and named the boat and all who were about to sail in her. It was such a joy to have so many loved ones praying with us and filling her…with friends even travelling from Oxford to be with us, kids crawling in and out of hatches, mates checking the rubberdub and outboard and Pete acting as a great barman on the quay. My mum and TP’s mum both gallantly climbed aboard and held court like a couple of experts and various of our kids and grandchildren came, ate and went ( grandchildren doing most of the eating…..thanks Noah and Phoebe!)

The one couple missing was Terry (TB) and Ruth Bufton with whom we had been staying for the past few weeks since renting our house out. Terry was ill in bed with a chest infection, though supposed to be crewing with Simon and Charlie….we optimistically hoped it was just a bad cold!

At last Rope Sole pulled away from the berth in a rapidly thickening fog…as Abbie and I ran to the sea wall with Ethan and Josef to wave, the boat, with precious crew disappeared within minutes….towards Yarmouth, to make the break and be ready for a dawn start on Wednesday

4am…..a bad start! Charlie nauseous and Terry too ill to come out of his cabin. Simon decided to make for Weymouth and Terry found a doctor who prescribed strong anti-biotics and no sailing for at least one week. Ruth drove to Weymouth to collect a, by now, very sick husband.

Ahh! What to do? The weather window Simon was so keen to utilise was wide open and waiting to be sailed through, Charlie only had 1 month and we couldn’t afford to keep Rope Sole on a marina berth any longer. We prayed. A lot!

And then TP stepped into the problem and became the solution. Kate drove her to chilly, damp Weymouth on Friday night where we all shared a hearty supper before once again saying farewell. TP, an accomplished racing sailor ( veteran of ’79 Fastnet race) ready to step into TB’s jacket and Kate’s boots!