I have just made a short trip across the Poros channel in pursuit of ‘grandchildren food’…ie. sliced and soft cheese, plastic ham, chicken nuggets, spinach pie, chocolate spread and pizzas

On the return trip I suddenly had the notion to make a little blog of the expedition which is so everyday yet exquisitely Greek. 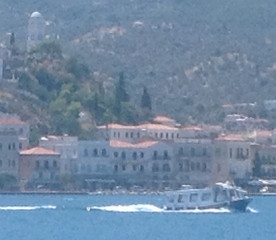 A long portion of quay is set aside for a colourful collection of caiques, or bum boats, which taxi folk back and forth to Galatas…pretty much all day and night at this time of year. You make for the rank and jump into the first boat…is that first from the south or north approach? ( you must be Greek to get it right). The boat will be bobbing and slewing but a firm foot and hand hold should launch you inside. There are narrow painted seats all around and a central platform over the engine. First you must give the driver…or captain or skipper…1€ or maybe wait until you get to the other side…or possibly hand over the cash mid flight…there is no set protocol, but on each boat get it right. Receipts are mandatory now…usually.

The skipper…or…?? well he may be jolly and smiley and clearly just waiting for your custom or absorbed with his gaily clad granddaughter who is swinging on the pilot stool or hugely and hotly clad in stiff denim and avoiding eye contact. We especially like the sun drenched smiley guy with the grey ponytail …but hey!

Today I travelled with hot-denim in one of the smaller boats, he waited until there were at least 20 of us squeezed along the plank-seats and a few standing, manfully braced with feet apart. He then ambled around untying ropes, gently shoving the stern then hovering hugely between boat and shore before one deft move had us all launched into the slipstream with him aloft the driving stool. Ordinary eye-blinking stuff.

The underway drama can be armchair, or, as today, white knuckle. With a   groovy Bavaria ploughing towards us at charter-frothing speed closely pursued by a hooting ‘flying dolphin’ hovercraft aiming hungrily for its’ next prey….we spun into top speed. Our little craft ploughed away and I bowed my head and considered the ‘typical’ selection of passenger’s shoes. Handmade hessian with natty string laces…thinnest of thin white flip flops, sturdy trainers and Romanesque sandals to name a few.

A selection of well taped boxes covered the central space and various packets, bags of tomatoes and magazines were strategically positioned for collection by assignees who always immediately appear from nowhere as soon as the boat nudges the opposite quay.

A tired athlete stoically sporting the 2004 Olympic strip slumped over his mobile phone and patted it into life, grandma straightened her back against the hot cabin sides and flip-flops twiddled happily with her snazzy bag straps.

Just another few minutes of everyday life in Greece.