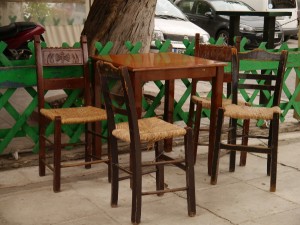 Imagine … A cavernous market hall, home to numerous stalls and noisy traders selling all manner of Greek foods and fancies plus assorted scarves and trinkets from the Far East. Around the market are streets full of shops, kiosks, banks, frozen yoghurt stalls and numerous vehicles ranging from 2 plus wheels to horse drawn carts.

We have developed a habit.

Simon sits in a little inconspicuous cafe with kezzie under the table….and orders a bottle of Fix…Greek beer.

I wander round the market picking up fruit and veg plus the odd smattering of little fish, bread sticks or other wot nots.

Today, having completed my mission, I joined Simon and ordered an ouzo from the owner….who peacefully cruised over inside his loose blues…check shirt and denim trousers, gently swinging a thread of beads as he did so.

Sometimes there is an ash tray of water for kezzie, sometimes not, today it was forgotten.

We considered the tiny dark space inside including its’ small bar with food preparation area behind and then admired the ‘extension’, provided by a frame made from scaffolding poles and laced with canvas.

A few more loosely fitted local gents slid onto rustic chairs and turned their gravelly faces towards the preoccupied host.

Well, he seemed to anticipate the order quite correctly and with barely a nod or a shuffle produced three bottles of cloudy lemonade.

Simon, by now, had mooched off to find some orange juice and milk from the mini market and I made a fuss of Kezzie whilst enjoying the ambience.

At the gravelly gents table a falling of glass onto concrete suddenly occured.  A tumbler had been knocked over and lay in a shatter of large fragments by a pair of protective old boots.

The eyes of our bead clicking host remained focused on the customer with whom he was chatting and the tumbler tumbler looked less than even faintly embarrassed. As our host’s conversation eased a little…he glided behind the bar and quietly offered his clumsy guest a piece of kitchen paper and a straw, which was deftly inserted into the lemonade bottle. Neither so much as glanced at the debris under the table.

He then came over, sat with us and conversed with Kezzie.