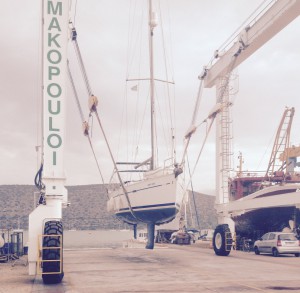 Rope Sole has been lifted and is now safely chocked in a cradle and tucked away at the back of the boatyard in our regular spot.
Now our elevated view is of olive trees, scrubland and hills flanking the bay. An amiable Albanian goatherd strolls his frisky nannys along the track twice a day or whenever he feels like it and their bells have a natural smile factor of at least 10.
The yard is strewn with busy owners, mostly German and French with a soupçon of assorted others…cycling purposefully on sensible but ridiculous looking ( well let’s be honest) folding bikes or briskly strolling to the shower block. No 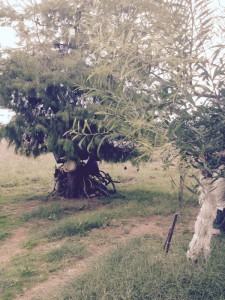 w the weather has shaken out most remnants of summer the number of folk winterising their craft drops daily. The village is returning to itself, no longer full of foreigners searching for bread and spinach pies at lunchtime then hearty outdoor fare after tools-down.
Our gentle hairdresser friend waits quietly for her local customers to drift into her parlour, seeking anything from a full on colour job to a lazy chat. When I dropped by one evening at 7ish her Mum was there too. Lovely to see her again after our first encounter which had involved a rather large slab of solid cake the demolishment of which she had to witness….so I was a little cautious. Ah, relief…after Mum insisting that I take a bag of the family lemons (which, thankfully, didn’t have to be eaten in front of her) I had a little lesson on the Greek culture of a few decades past. Apparently, when she was 14 her father announced at breakfast one day that he had found his daughter a husband. She was so shocked she dropped her yoghurt! 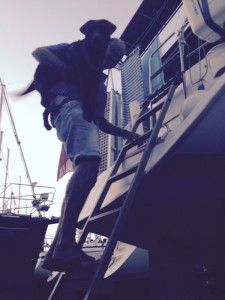 I was so shocked I forgot to ask how old the groom was….but they did have a happy marriage and three children.
On the way back from collecting a hire car the following day, we saw the most elegant grey bird poised on a rock in shallow water. Later we discovered it was most likely a crane. Huge, but soaring effortlessly out of photo range but happily, not from our memories.
That’s probably enough from me for a while. Thanks for reading along the months with us and for the very welcome emails you send.