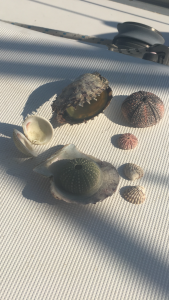 Well we all know about the game of compromise and navigating this gentle art is, as you might expect, somewhat vital to the happy and (mostly, ho ho) easy going life we call living aboard!

I once joked to a friend that living on Rope Sole was like camping in his hall…he was appalled and retorted that his hall was way bigger than the interior of our boat!

Right now, in contrast to a few long, rather jollopy jaunts around the Cyclades and Saronic gulf we are anchored in a most idyllic bay. The habitable space happily extended to include decks, cockpit and the apron of swimming pool created by the rock lines from our stern. 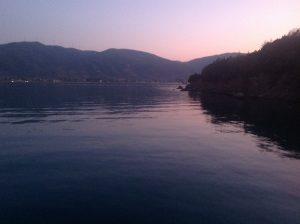 Live-aboards (mostly French) who sensibly survive by running for home as soon as the July temperatures and charter boat numbers increase….are slowly trickling back….many returning from their own unexpected heatwave… and the bay is now home to an eclectic mix of craft and crew.

Currently one is playing a merry game of scales on his flute. Every now and again we get 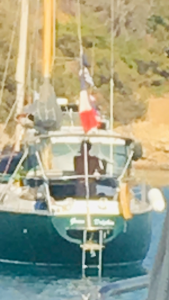 excited as the notes resemble early bars from the Flight of the Bumblebee, but he knows how to tease us this one.

Last evening our happy flautist trilled away for at least two hours and today he has started early! Simon will join in later with his guitar. Could it get any better?

One of my pleasures is treasure seeking along the craggy shoreline and today I ventured away from the most obvious rocks and was rewarded with the tiniest pink sea-urchin shell amongst other bits and bobs. Before we leave I will collect a bag of washed-up litter, a very small contribution towards our stay. 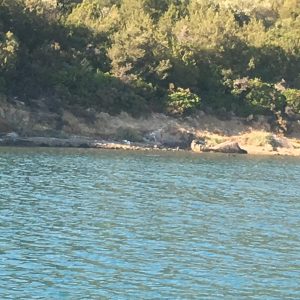 Kezzie refused to accompany me which is unusual, preferring instead to keep critical watch from the bathing platform astern. She has developed a new game of jumping in to pursue a well flung flip flop, swimming ashore for a wee then conveniently forgetting the footwear so she can observe me later, making a necessary expedition to find it. ‘Kezzie’ we say, you are a labrador ree..trie..vor!  A wide-mouthed yawn means ‘so what!’

She happily gazes at the sardines torpedoing towards our strewn crumbs and the gar fish darting close behind, only really bothered by unexpected snorkelers or a person shaped rock, all of which receive a sharp and vocal reprimand!

Nights in this particularly fine hurricane hole…perhaps not the very best which surely must be off Paros…are delightful. Occasionally, as recently, we are invited to fragrant suppers aboard Salty Dog’s ketch but usually we play cards, swat wasps and eat chicken and pea curry whilst mulling world events and watching the shoreline lighting up. 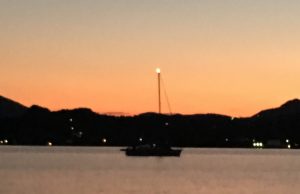 The wrap-around waterline is edged in just a few well spaced enclaves by modest homes, a waterski school and a fledgling boat yard. Gradually, the sometimes reluctant electricity, transforms the darkness into a shimmering splutter of yellow and gold sprinkles. Simultaneously the sun glorifies the rock, turns the western sky red-orange-red then glowing-gone. 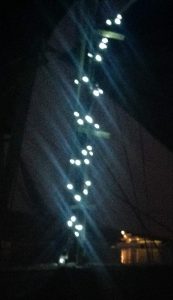 Some yachts pop their mooring lights and others their less legal and flashing solar powered others. Everyone mostly retaining visibility, some preserving precious battery power whilst hoping for the best.

Our little string of solar lights from Poundland adds an unashamed touch of bling to these precious evenings of calm but the greatest and most spectacular bling of all spreads across the sky as the nightly festival of stars reminds us, yet again, who is really in charge down here.